Some of you know that we added to our pack in July.  Jinkxy is the sweetest little pipsqueak ever.  She was a teen mom re-homed by the rescue I volunteer with, Doodle Rescue Collective.  Her owner either planned and chickened out, or was to dumb to know the facts of life when she purchased two (not related thankfully) minis from a doodle broker.  She purchased this cute pair when she was at home during the Covid shut-down.  When the country opened up again she was transferred to the Los Angeles area and worked long hours, leaving her two puppies unsupervised for about 12 hours a day.  She decided that the dogs were too much trouble so contacted the rescue, but was incensed when it was suggested that the female (then named Sydney) was undoubtedly pregnant.  She cut off contact with the rescue, until........ weeks later when Sydney was at a pet sitter's having puppies.  The sitter told the owner they would not keep Sydney or her hubby, so the owner reluctantly called me.  Luckily there was a wonderful foster who picked up both young doodles and by then two puppies (the third being born in the car) and taught Sydney how to be a mama. Mama and pups thrived, but when it came time for mama to leave, I couldn't let her go to any home but mine. Sold as a goldendoodle, Jinkxy doesn't fit any perameters for being a goldendoodle - she is tiny (light as a feather, doesn't have a poodle build at all, has a spotted coat (merle coloring found mostly in Australian Shepherds). blue in one eye and she herds ( a little ankle biting never hurt anyone, right?).  We truly figured she had Australian Shepherd and some small curly-ish dog like maltese or ??? so I DNA tested her with Embark.  Because she is from a puppy mill, I sprung for the health portion too.  The results were fascinating if you like that sort of thing. 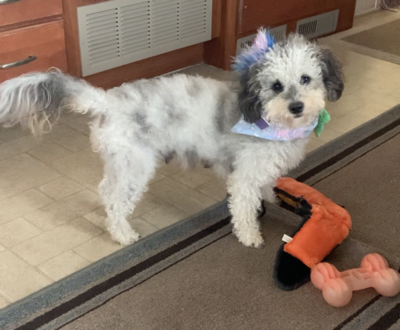 Jinkxy is indeed a mini goldendoodle - F1B with a small poodle on both sides of her family tree.  Poodle people can fight over where the merle coloring came from and I don't really care, I just think she is uniquely adorable.   If you are interested here is a link to her DNA results.  http://embk.me/jinkxy?utm_campaign=cns_ref_dog_pub_profile&utm_medium=other&utm_source=embark