I've been a member of Doodlekisses for about 8 years I think. I don't post anything and just browse through once in awhile. Back in 2011 I think, my wife and I adopted Porsche, an f1b Goldendoodle. We also had a black multi-generation Labradoodle, Bentley that was about 1 1/2 years old. We love our dogs and take good care of them. In May, 2017 Porsche started to really start hanging tight to me, just not herself. She seemed to be trying to tell us something. We found a lump on her right side just above her shoulders on her neck. We called our vet and ran her in the next day for an exam. Our worst fears were confirmed, lymphoma. We started her on steroids immediately which brought down the swelling in her lymph nodes, but our vet had told us we would maybe have 6 to 8 weeks. We got 6 more weeks with one of the sweetest dogs I have ever known and the cancer was shutting down her circulation and she was biting at her front legs and doing a lot of stumbling. I thought I'd be ready emotionally, but I still find this hard to tell as I type. I could even tell Bentley was looking for her. I know he knew there was something wrong with Porsche as he had acted differently around her for the last few weeks.

I kind of moped around for a month and my wife and I talked about buying another Goldendoodle, but I was afraid we'd always compare another Goldendoodle to Porsche, so I resisted. Actually I down right said absolutely not. Bentley and I went on our walks and hikes in the woods and fields by ourselves. Bentley became kind of a velcro dog. He is very OCD, kind of like me. There is a schedule to everything and a place for everything. He knows the routine. June, 2018 I told my wife I wanted to get an Irish Wolfhound. She resisted telling me all the things I already knew, short life expectancy, high cancer rates along with other medical reasons. I told her we had already gone through all that with Porsche and I had always wanted an Irish Wolfhound, but she still wanted another Goldendoodle. I told her fine, we'll get both, but that I had already found the Irish Wolfhound I was getting. We live in the country, we have a six foot high century fence around a half acre behind the house for the dogs plus more land. We live near a 15,000 acre public wildlife area. We have plenty of room and love for a couple more dogs. I bought my Irish Wolfhound and brought her into our family and named her Boo. My wife said she was going to wait but would keep a watch out for a Goldendoodle. We worked at training Boo and she trained easily, house breaking in just a couple days and within a week coming when called and sitting. Most people said Wolfhounds are hard to train. No people are. It's funny but there is a lot of Porsche in Boo. Bentley doesn't like pups we found out, lol. He's kind of a grumpy old guy, but he came around and they are best of buddies now. Bentley has always had a love for soccer balls and loves to retrieve them. Boo isn't a retriever and neither was Porsche. Porsche would love to steal Bentley's balls and then play the game of "chase me", which was always her favorite game. She loved it when Bentley chased her all over the yard, Boo does the same thing and we never taught her this. A lot of the moves Boo makes and mannerisms are the same as Porsche's. Is it just us? Inadvertantly do we teach them these things? You may be thinking right now ... "Mike, you are comparing Boo, an Irishwolfhound to Porsche, a Goldendoodle". You'd be correct in that. Bentley is 24" tall and is a chubby 80 lbs. Porsche was 23" tall and a nice trim 65 lbs before she became sick. Boo measures 32" and weighs a trim 130 lbs, (she was at the vet's last Monday for a check up and her lymes booster). On March 5th we went and picked up a 16 week old female Goldendoodle that we named Goose. She is the product of an f1b Goldendoodle, (Goldendoodle x Standard Poodle), now bred back to a Golden retriever. 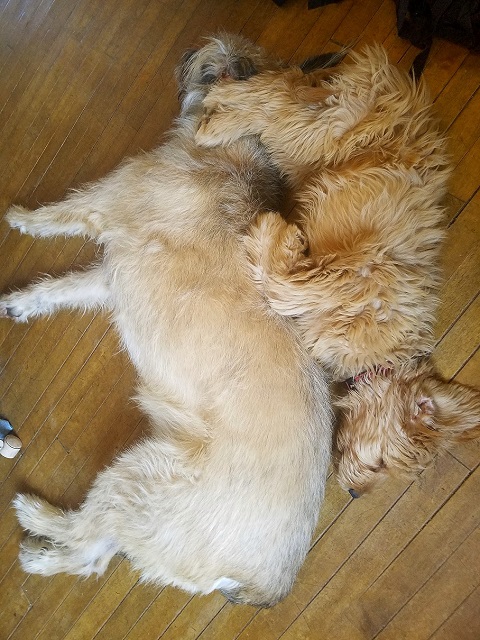 This is Boo and Goose napping after play time. It's funny but Bentley plays along every little once in a while. Mostly he just sits by me.

Goose goes into the vet tomorrow for her check up and rabies booster. She is weighing in at about 35 lbs. and we figure she'll mature out about 75-80lbs @23-24". She's a Bedhead!!