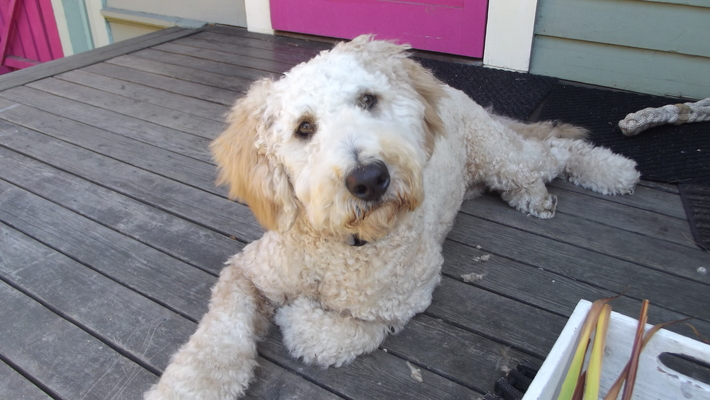 Trilled to have found DK and have been devouring many discussions.  We live in Bellingham in the PNW and as of 4 weeks ago have a rescue adoption via CL.  Honey is now a 9 month old, 42 pound healthy female and looks to be a F1b golden doodle.  We got her from a well meaning young couple that were overwhelmed.  She was being raised in a 600sq foot apartment along with 2 small toddlers.  She was house and crate trained and accustomed to being brushed.  However, she had not really been exposed to the outdoors, other people nor other dogs; thus was a hot mess of fear, anxiety, enthusiasm and not knowing what to do.
Over the past 4 weeks we have been taking her out for walks 5-6 times a day, she enthusiastically wants to play with other dogs, meet people, has been to the beach 3 times getting her toes wet.  We've had her spaded, gave her first hair cut (it only took me 4 days lol), and has had a couple of baths.  OMG she is intelligent, in 5 minutes she learned to fetch, shake and carry in the newspaper.  She walks well on a gentle lead and comes when called.  But she is still working on her manners, e.g., no jumping, not barking at everything little thing...and still trying not to be soooo ferociously enthusiastic about meeting new dogs and people.  It only takes a few moments and she is then off playing with other dogs and seems to be your new best friend.  She is getting better but has a ways to go at walking along and ignoring people and other dogs on the sidewalk.  However, she is very good with toddlers and calmly sits and/or approaches them nose to nose (no licking, barking or jumping) and remains calm while they pet her.  She loves our cat and his cat food, brings him toys and try's to get him to play with her.  Honey has become used to hanging out in our small fenced back yard for about 15-20 minutes entertaining herself, has learned from the cat how to open the screen door to get in and out and has discovered counter surfing.  She has come along way in 4 weeks, we have had a private training session and will soon be doing puppy school.
Our 3 kids are grown and launched, we dog sit for the neighbors and friends.  Our friend has a golden doodle that we have been sitting for years for periods from an overnight to 2 weeks at a time...who is very well mannered and goes to work with her mom 4 days a week.  In truth we have also been abit overwhelmed but are committed and things are improving.  She is a sweetie that has a lot of potential to become a proper PNW trophy dog...to which I've never and somewhat horrified by the thought of a trophy dog (having grown up in rural Midwest where a dog is a dog and has the run of the farm).
Honey and Tim