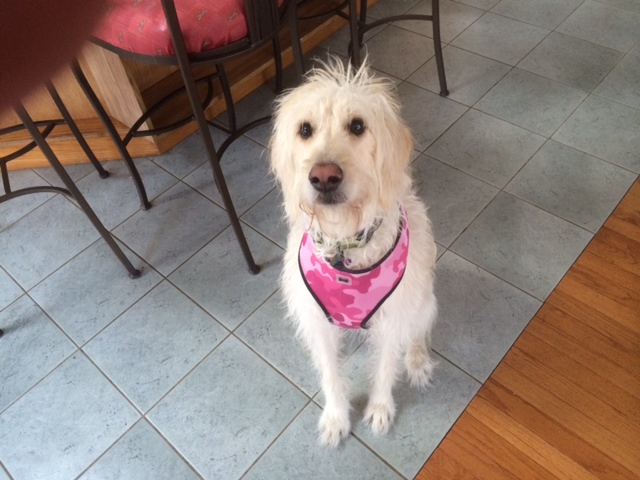 As I write this it is Saturday, July 26, 2014.  A week ago today my wife Chari and I drove 900 miles round trip to southern Illinois to pick up our newest family member, Lady Belle, a 2 ½ year old Labradoodle rescue.  We went through an application process, had references checked and were selected to adopt her by the Doodle Rescue Collective.

While the Collective normally has dozens of applications for each Doodle they put out for adoption, there were a small number of applications to rehome Belle.  You see, Belle is blind.  “Why would you adopt a blind dog when sighted dogs are available.”  In our case, what drew us to her was the fact she is blind.

Of course, we’ve since found out that there are many Doodle lovers that were pulling for this girl to find the right forever home.  I find that a bit humbling as a lot of people are interested in what kind of life she will have in her forever home and what kind of dog lovers we are.

Two weeks ago we awoke Sunday morning to find that our 13 year old chocolate lab Coco no longer had control of his rear legs and couldn’t hold his head straight.  We think he must have had a stroke during the night.  He had been on the decline for some time and was nearly blind and nearly deaf because of chronic allergies, ear infections, etc.   He also had major hip dysplasia issues.   Yet the evening before he had participated in one of our popcorn and movie nights.  He couldn’t see the popcorn we threw his way because his eyesight was nearly gone.  But that didn’t keep him from locating it with his nose and scarfing it down after he felt it hit his body.  On Sunday, we made the toughest decision a dog owner has to make, the decision that it was time to put him down.

On the way home from the vet hospital where we participated in the process that put him to rest, I said to Chari, “Lets wait a while before we get another dog.”  But losing a dog leaves a hole in your heart.  Chari has always liked standard poodles.  I love labs.  I thought a Labradoodle would be a great compromise.  A few days later I found myself Googling “Labradoodle rescue.”  I figured I was just doing some research.   Little did I realize I was about to head down a very slippery slope.

I came across Belle’s story like many of you on the Collective’s web site.  Like you I was drawn to her and her history.  The Collective wants avoid having any out-of-town trips requiring kenneling or a temporary stay for the 2-3 months following adoption.  I have two trips that will fall into October.  Chari wants to accompany me on one of those trips.  So our choice was to either move quickly, or pass on attempting to adopt Belle.  We debated whether it was “too soon” a bit and decided to apply.

Why adopt a blind dog?  Well first of all, in Coco, we had just had one.  So we had a sense for what we needed to do to accommodate Belle in our home.  Second, Chari is a Vocational Rehabilitation counselor with the State of Wisconsin.  She works with people with disabilities and employers on adapting the work environment to accommodate their disabilities.  Prior to that she was a teacher of the blind.  And I did my research, reading most of the material posted on providing adaptive environments for blind dogs that is out on the Web.  So it was a ‘slam dunk’ for us to take on this ‘challenge’.  What we’ve found in the last week is that it isn’t much of a challenge at all, at least not with Belle.

Like a lot of rescue dogs, her PetFinder promotional materials painted a great picture.  I still remember what it said even though the listing has been down for a few days.  “She’s a lover,” her foster mom said, “This is a once in a lifetime dog.”  With me, that statement sets a pretty high bar.  There is a long-gone purebred Collie named Dancer that holds that place in my heart.

So far she has more than lived up to her advance billing.  This is one amazing dog.  I’m going to let her tell her own story from her perspective.  Yes I know dogs can’t talk and write.  Even the best have a vocabulary of 100 words.  So I’m going to lend her my vocabulary and writing skills.  Her first post will tell you about her history prior to being adopted by Chari and I.  We don’t know a lot of the details so it is going to be a bit sketchy.  It is the only part of the story where I’ll use some historical fiction to fill in missing pieces.

We do know that her blindness was caused by blastomycosis in the summer of 2013.  Dogheirs.com says, “Blastomycosis is a relatively rare, but potentially fatal fungal infection caused by the pathogen Blastomyces dermatitidis. The fungus grows in moist soil or vegetation. In certain conditions, spores are released into the air that can be inhaled by dogs or people, thereby infecting them.”  Both Wisconsin and Illinois fall solidly within the range of this pathogen.  Dogheirs goes on to say, “Ocular blastomycosis can cause rapid and permanent blindness.”  Her foster mom/veterinarian does not know why this infection went undiagnosed and untreated for a major portion of a year.  However, it is a rare disease and is often misdiagnosed.

In her first visit to our family Vet, he gave her a pretty clean bill of health, consistent with what we heard from her foster mom/vet Melissa.  He told us we would need to stay on top of her ears.  Then he examined her eyes.  He indicated that the pathogen had done significant damage to her eyes.  So folks, there won’t be a post in the future talking about the miracle recovery of Belle’s eyesight.

We also know her family turned her into a shelter not long after her blindness appeared.  I’m going to assume that they had kids.   A combination of the guilt of playing some role in her losing her sight, the burden of dealing with a blind dog’s needs, and the needs of their young family was too much for them.  I’ve read at the DRC site that the most common characteristic of doodles ending up in rescue is that the family that turned them in has young children.  So my assumption is certainly plausible.

We also don’t know why her stay with her first adoption was only three months.  Maybe Belle was still struggling emotionally with losing her sight.  That frustration can manifest itself in a number of behaviors that can be hard to deal with.  So she ended up in a shelter for a second time in 90 days.

Then Michelle came along to provide Vet care to other animals at the shelter, found her in a small pen at the shelter, and opened her heart and home to this beautiful but traumatized creature.  In about 90 days of foster, Belle emerged as a happy well adjusted dog.  Michelle is a hero in this story as she saved Belle’s life.  I didn’t spend a lot of time talking with Michelle about what was accomplished in that 90 day period.  I was too busy checking Belle out.  I know Belle lived with at least three other dogs and a few cats.  I’m sure the socialization helped.  Michelle told me she brought her weight from skinny to 64 pounds, an appropriate weight for her size and age.

I don’t let myself feel sorry for Belle.  We transmit our emotions to our dogs.  There will be no coddling of this lady.  Oh, I’ll do everything I can to help her further adapt to the fact she can’t see.  But I’m going to push her.  I want her to feel the joy of running and taking on challenges.  I have some ideas on how that can be accomplished.  I’ll share it in a future post.

Belle’s first post will talk about her history up to the time we adopted her, using the above facts and assumptions as a framework.

All the posts that follow her first will talk about things that have really happened.  Dogs have emotions and they wear them on their faces and bodies.  So I’m going to attempt to describe how Belle feels by reading her body English in addition to keeping you up on her progress.

Periodically, I’ll step out of character (from hers into mine) to give some of her pieces a context.  I’ll talk about what we are working on, and get your input into some of the challenges we encounter and the opportunities we see.  So feel free to comment on this blog.  That’s what communities are for.

We owe a debt of gratitude to the Doodle Rescue Collective and especially their adoption coordinator, Liz and Belle’s foster mom, Melissa.  They collectively turned over a well-adjusted, happy, healthy dog that has done an amazing job in adapting to her disability.  I cringe when I use the word disability as there is no way this dog deserves the disabled label.  Almost everyone that meets Belle walks away without a clue that they just encountered a blind dog.

I hope you enjoy this blog. 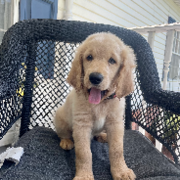 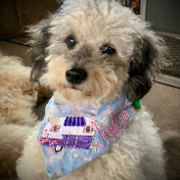 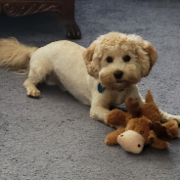