Luna came into the DRC rescue program with her (suspected) sister Stella (and they are aptly named...these dogs will be someone's moon and stars!). I of course don't know what happened in their 2+ years beforehand, but some horrible person did a real number on these girls. I had both Stella and Luna for about a month and while Stella is more outgoing and less fearful than Luna, she still had some anxiety issues and was overly protective of Luna. Stella is now being fostered by Eric Nater (doodle dad of Cooper and Claire) and is loving her new foster siblings! I'll let Eric continue to tell Stella's story...I think he's half in love already! Both girls are HW+ (an ounce of prevention, people!), so they'll be fosters for quite a little while.

When I first met Luna, she wouldn't let anyone pet her, and shied away from all people, She also had a singular goal...escape! She managed to chew through two sets of harnesses, and while I had initially thought Stella was chewing through her harnesses too, I actually caught Luna chewing on Stella's! Now she's in a martingale collar and doing much better (although Callie frequently has to be harnessless and collarless in house, because Luna wants to bestow freedom on her too!), I hate to casually say that she displayed all of the "usual" issues a puppy mill breeding dog has, but she does...and then some! These girls were definitely out on their own at some point. While they had no issues with being inside a car, they had MAJOR issues with cars passing by. Additionally, Luna is scared of the dark. I never thought about a dog having a fear of darkness before, but Luna outside in the daylight and Luna outside in the light are two completely different animals!

Even with some continued fears, I'm incredibly proud of the progress Luna has made. A list of them is below.

learned how to play with toys

discovered a deep and abiding love for antlers

learned how to walk on a leash (she pulls some when she gets scared, but we are EONS away from where we were!)

stands patiently while I prep her dinner and waits to be served (she's better than Callie with this!)

developed a deep and abiding love for cream cheese treats (she wouldn't initially take any kind of treat for my hand...then she would only take one if I brought it to her on her sofa perch...now she comes in the kitchen as soon as the fridge opens, or when I call her name)

she is a huge snuggler

she not only learned to poop while on a leash (she didn't poop for the first 3 days at my house and I was freaking out, because she is a known sock eater!!!) but she has learned to poop in the ivy by the zoomp leading down to the creek (aka where I don't have to pick it up).  Callie must have taught her that one, but I did train Callie to go there!!!

she is starting to warm up to my friend Robyn (neighbor and mom of Callie's BF, Louie). Luna used to go to the end of the sofa and cower, or come hide behind me when she was over, but now, she stays where she was and lets Robyn pet her.

Luna has learned to love the dog park. At first, I kept her on a 50' lead in there (I wasn't confident I'd get her back, even though it's a small area). Tethered or not, Luna initially just hid in the little wooded part. She didn't play, she didn't do her business, and she really didn't move. Now she tears around the lower area (away from the people...she's still very slow to trust people), and plays her furry tushie off! She is FAST, and looks so happy and gleeful when she runs (she's in very early stages of HW, and hasn't started the full treatment, so she can still play).

Belly rubs are now aces in Luna's book. (I'm encouraging her, and trying to pretend that her nipples don't gross me out)

All in all, she's a beautiful, sweet, loving doodle girl. She will be a great pet for the right family...and that family will need to have some patience and another dog.

Below are some photos...she of course doesn't actually have glowing green eyes! (and it turns out that my red eye remover doesn't work on green!) 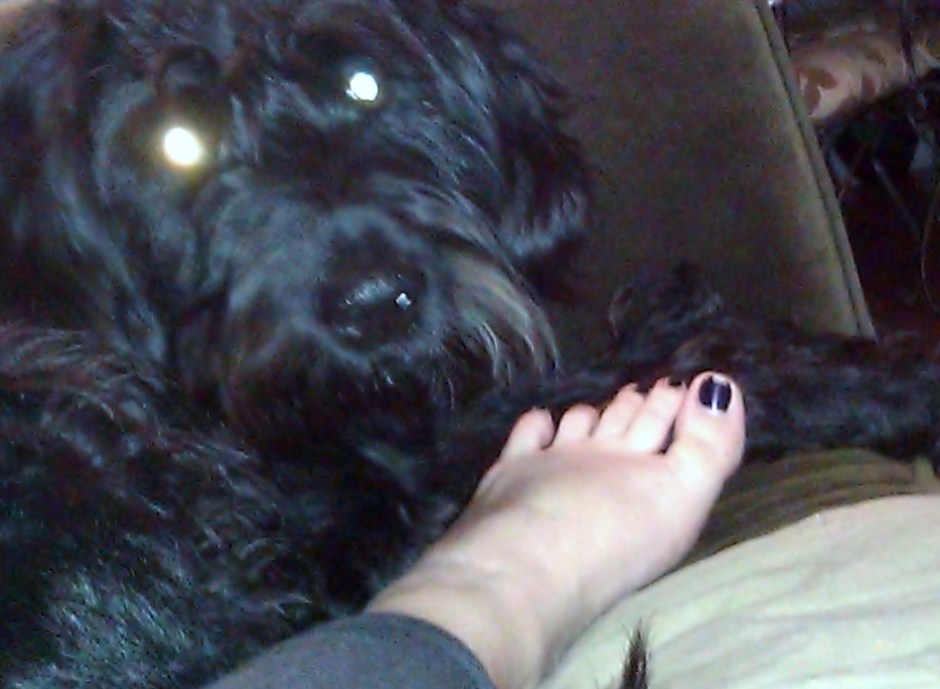 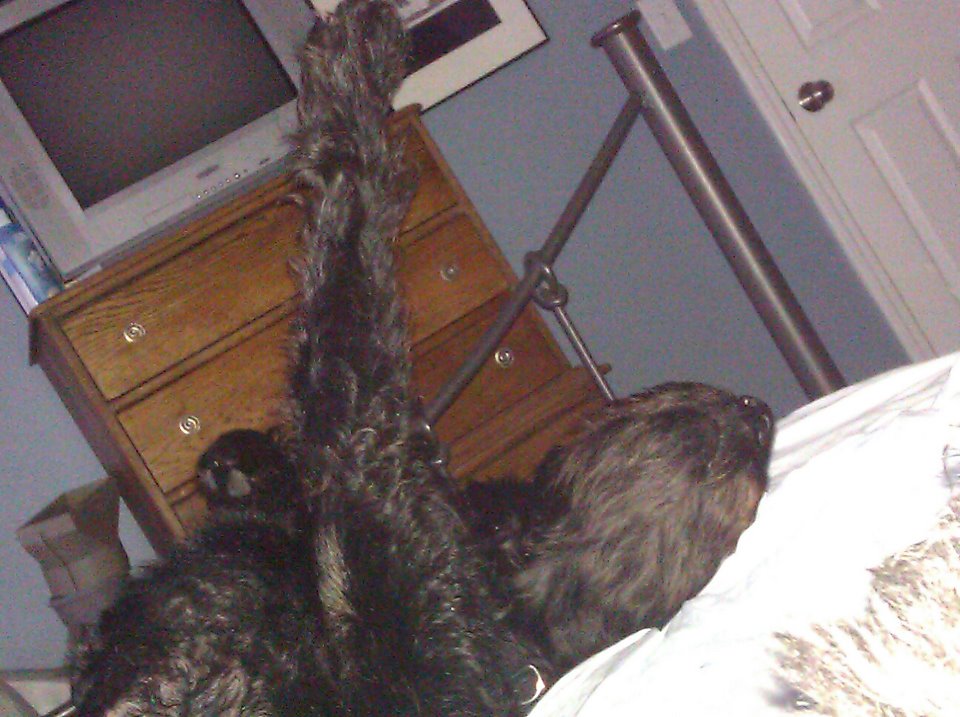 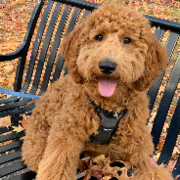 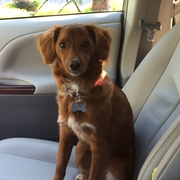