I swear I do not live in the country! I live in a suburb very near the center of my town. It’s not a huge town, but it’s definitely not the country! And it’s far more developed than the subdivision I moved from a year ago – maybe that’s the problem. There was more room for the wildlife to be out in the woods. But I have seen more possums in the yard since I moved here than ever before – in fact I’m sure that I never got up close and personal with one until we moved here.  But the dogs and I have had several wildlife events since then. And I’m glad Katie just likes to bark at them and not engage them, because they scare me more than a little.

So tonight I let the girls out and Ava was fine but Katie was barking. And sometimes she barks at some imaginary thing she sees. But tonight she wouldn’t come back for her treat. So I turned on the flashlight on my phone to go see what she was doing, and there was a possum just lying there. I made the girls come inside and went out with a flashlight to investigate while dialing to summon my dad to come do something. I can be independent when it comes to birds, mice, even moles. But something the size of a possum… I admit it. I need a man to come take care of it for me. Of course my parents were on their way somewhere and not available to come assist at that very moment.

And then I swear I saw it move. Maybe. Or maybe I watch way too many horror movies. But I am certain that as I move the opossum is watching me. And I saw it’s ear twitch. And it’s definitely a zombie opossum and we’re all going to die! And maybe I should whack it over the head with the shovel that I’m clutching. Except that this creepy thing is an animal. And even if it is a zombie and it’s going to rip my face off as soon as I think about turning my back on it, I don’t think I can hurt it.

And that’s when my mother in all her wisdom (who was still virtually holding my hand through the phone) suggests that the possum is playing possum.  And I’m like, really? No. That’s just a saying. But I googled it, and sure enough – when they get scared they get shocky and go into a comatose state that can last for 40 minutes to 4 hours!

There are so many things in this world that I don’t know. Don’t even get me started on this whole conversation I had about how cows give birth. But in the meantime there is an unconscious possum in my back yard. And I really wish it would go back to anywhere else. I’m sure there are plenty of yards that don’t have curious dogs where the possum can do their own little possum-y thing in peace.

I’m thinking maybe No Possum signs along the fence. I’m sure the zombie possum and all of his brethren can read. In the meantime the dogs are housebound until their little buddy comes to and finds his way out of the back yard.

Adulting is so hard! 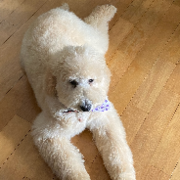