Wilbur got neutered this past Thursday, and was pretty mopey until Saturday morning (evidently, me making him a bunch of chicken didn't really make up for me having his testicles removed!). We had a pretty normal weekend, with one exception...Wilbur figured out how to break out of the kitchen. To be fair, it is closed with french doors and a few good solid jumps will open it. Wilbs had just not attempted this previously. He's been such a good boy, that I really didn't fret over it too much. Part of me was a little bit happy that he's comfortable enough to test limits.

Fast forward to today...after work, I was taking the Wilbur and Callie on their walk and decided to make a pit stop at dog park in my community. I know that Wilbur isn't supposed to get crazy since he still has stitches, but he never really plays at any park. I'm pretty proud when he just wanders away to sniff, as that's a HUGE leap from where we were a month ago. So when we get to the park, a neighbor - Deborah - had her two dogs...Boomer a bassett mix and Emmet the goldendoodle (I keep BEGGING her to join DK, but no luck so far). Emmet isn't so big on playing, but Boomer and Callie are running buddies so they immediately took off. Wilbur went and did his business and then STARTED RUNNING WITH CALLIE AND BOOMER. WHAT?? This has never happened before and there have been many opportunities. Then, Callie and Wilbur actually started playing together, wrestling and nipping just like regular dogs. When a walker with a dog passed by, Wilbur went to the fence with Boomer and Emmet and BARKED. So, nearly four weeks later, I've just heard the Wilbs' voice.

Then, we walked back to the house (after greeting Bruiser the chihuahua, Brutus the yorkie, and Maisy the yellow lab), I fed them their dinner (and they promptly switched bowls, as usual). I made my dinner and put it on the coffee table (yes, I was being bad and eating dinner in front of the TV). I now realize how spoiled I am by Callie...since Callie is total velcro to me, she usually walks from room to room with me. Wilbur doesn't and used this as an opportunity to eat my dinner (well, he ate the balsalmic glazed tilapia and sweet potato...he wasn't terribly interested in the broccoli). I couldn't have been out of the room more than 40 seconds (however long it takes to fill a glass up with water).

After dinner, I came upstairs to work on the computer. My guest room doubles as an office, so while I was working, the dogs were playing, wrestling, and land-shark biting each other non-stop. Again - this just has NEVER happened!

I hope that none of this comes out as a complaint - I'm SO very happy to see Wilbur's personality coming out - I just thought it would come out gradually, and not in the space of one evening!

(oh, and I totally took Wilbur eating my healthy dinner as a "sign" and went and got some pizza instead!) 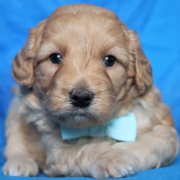 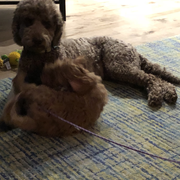 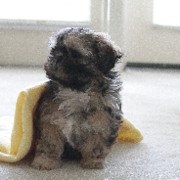