Yesterday, it was two weeks since I picked up Wilbur in Athens. I can't believe it's just two weeks! He's just not even the same guy he was back then (and I'm not just talking about his smell!)! While I can't claim that he's become a happy, playful doodle, he as DEFINITELY become less wary and his confidence that he will regularly get food, water, attention, and affection has grown by leaps and bounds. He is a very mellow boy who probably won't be playful like Callie (Callie's just super playful and energetic) but not every dog is, even if they're doodles. That said, Wilbur does regularly choose toys from the toy basket to play with, and lays on the floor with Callie so they can trade off (I bought a few more antlers to keep the peace...they're a household fave!).

The weight gain has been slow, but he's eating much better than when he first arrived. I'll take him to get weighed again on saturday morning (I'm scared to take Callie - she's been overeating a bit with the presence of treat-food and another bowl of kibble hanging out!). He only gained about a half pound last week, but I'm hopeful for at least a full pound this week!

His hair is starting to grow and he's truly a handsome dood! He can snuggle with the best of them and is super affectionate! Example...just about every night I wake up at some point and discover that Wilbur is giving me kisses, usually on my face. I think that's adorable. He's just loving like that, and I welcome his affection, no matter what the hour.

The next few weeks will be BIG. Wilbur is getting neutered next Thursday, and then has a photo session scheduled for the following Monday. After that, he'll go on petfinder. Then I'll get to find out who the dog I've been keeping REALLY belongs to! (is it bad to sorta hope that it takes a couple more weeks before his family finds him?? I'll miss that guy!)

Can't BELIEVE that I left this part out...the Wilbs has discovered the laundry basket and the joy that is dirty socks and underwear. A bad habit to be discouraged of course, but I love that he's so secure now! 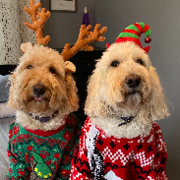 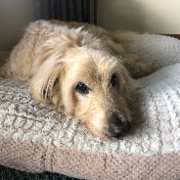